Expounding on that last picture of Stephen and what appears to be a pair of pink lace underwear...

So we kept going down the keys until we reached our final destination, Key West. We had no idea what to expect. Up to that point the keys had offered beautiful vistas of the water, but were pretty touristy and a little bit ugly in terms of what man had made on them. We hoped Key West would offer something different.

And it did! Key West was full of beautiful homes, nice restaurants, and a classier side of tourism!

Until we stumbled upon backwoods Georgia with this home across the street from the cemetery. One lonely pair of underwear, dangling in the sea breeze.

There were also nice churches and civic buildings across this relatively small island. We walked from one side to the other in about 20 minutes.

Most fun Walgreens ever, don't you think? Devin should get a job here.

We went and took the mandatory photos down at the tip of Americas ween. I didn't realize it was only 90 miles to Cuba.

For dinner we went to the Half Shell Raw Bar on the water.

Troopers ready to eat after a long and busy day. Actually, Beef didn't eat. She wanted to go to Wendy's to get a salad, so she just watched eat.

Devin and I split a plate of oysters that had different seasonings, from BBQ to lemony zests. They were great...I love oysters!

Crab cake sandwich that was reported as okay.

I felt it was necessary to eat something caught in the water right outside our window, so I had this fish. It was seasoned well and very delicious.

Yes keys...we ate you raw, and found you rather to our liking.
Posted by Side of Jeffrey at 7:25 AM 1 comment:

Sorry mom, I don't have any pictures of you in Florida with us for those two days, my arm still hurt too much. But I was feeling just well enough to bust the camera out when Feef, Beef and Bodge flew in the next day!

Caitlin took them to the biggest outlet mall in the world! It's like six malls of just outlet stores, including spendy Italian stores in Europe like Salvatore Ferragamo. Bodge and Feef tried on some belts. Hey Bodge, you know what you can do with that belt? Yeah, you know...

Caitlin is always on the lookout for boat shoes that could be worthy to replace my Sperry Modern Amusement boat shoes...but she knows it will never happen. They are irreplaceable.

Apparently Dairy Queen was had...I was busy enjoying my first week of work on percocet.

Later we went out for dinner and to the Miami Ballet that was performing in FoLau. Downtown FoLau was still alive with Christmas decorations, in the form of dolphins. Hmm, I guess it's better than pretending they are something they are not. Ride that dolphin Beef!

The lights do add an awesome glow downtown. Come to find out, these lights are up year round.

We aren't in Kansas anymore Mittoo.

We stopped by a restaurant on the river for a meal. They gave us free crab cake sliders. So far we were being treated like honored guests to our new home.

Bodge looks pimp and ready for an awesome night out.

The bill was paid and we hit the ballet. It was actually four shorter ballets, including one piece by Twyla Tharp that I really liked quite a bit. The first three were quite good, but the fourth was one of the worst ballets I had ever seen. It was like a western ho down. Amazingly bad...I was dying to get out of there. Maybe it was because my drugs were wearing off??

The crew...a train is passing by lightening fast in this pic...so you cam see through it.

You can barely see that I am wearing my sling in this picture. with all these new surroundings, how could we not snap some shots.

On Saturday we went to the Florida Keys. Holy crap I finally felt lime I was in Florida and ready to enjoy some tropical lifestyle. Until then it had been quite cold for the area...in the 60s. But this was a beautiful day.

Who knew that I would one day become the fat brother? Yep, it happened. I'd have to get all crazy diet to catch up with Stephen.

Oh no Bodge, don't get your feet wet! Hey Devin, do you know what you can do with that surf? Yeah, you know.

We had discovered one beautiful island amongst hundreds in the keys.

Originally there was a train that took people from island to island before they built the highway. It got completely wiped out by a hurricane in the 20s, but some pieces remain, like this piece. Occasionally they blow up another section for a movie.

Don't you dare fish from there!

But feel free to enjoy the vistas.

Some pretty white dudes lay out for some momentary sun and a light nap.

But the need to pose was too strong. Hey Steve, you know what you can do with that pose? Yeah, you know.

Stay tuned for an explanation of this picture...
Posted by Side of Jeffrey at 3:29 PM 4 comments:

Nothing Good Happens After 8:30

I love being a parent in the day time. I thing I do a pretty good job. My days as the father of Max are filled with joy, happiness, patience, kindness, fulfillment, caring, fun, comfort, contentment, peace and obviously love. I never imagined that it would be so amazing.

Then the night comes and Max goes down to sleep. Until morning my nights are filled with fear, anxiety, frustration, self loathing, indecisiveness, sadness, pain, guilt, sympathy and questioning. In the inevitable event that Max wakes up at least once at night, I lie awake going through all those emotions trying to decide what to do...what will be best for him. Does making him cry all night until he falls asleep make sense? Some say yes. Does getting up after 20 minutes to ensure he isn't sick make sense, and risk him getting into a pattern of waking up for comfort every night? Some say yes. Does sleeping with him until he's older and can establish better sleeping habits make sense? Others say yes to that.

There is no answer, which is why it's sad and why I pray every night that that will be a night where Max sleeps all night...

Taco Bell we salute you! Thank you for your delicious pseudo-meat products that we have all grown to love as an American treasure. I was so offended when some lame people thought it okay to make a big deal about the amount of beef in the meat at Taco Bell. Um, did any of my readers ever think there was that much meat in the beef? We just love it for what it is.

In fear of Taco Bell losing business and shutting down stores, we decided to show our support by getting people together and eat at our local TB. This is not knew. I was in line every day when TB had the rat infestation story unleashed on them. I was in line every day during the TB ecoli scare. And here I was, now with wife and son in tow, showing my support.

Two willing and happy supporters. I love them for their dedication. Max, what would you do without cinnamon twists?

We brought friends. Turns out people I hardly know in Fort Lauderdale will show up if I mention supporting Taco Bell! That's the power of love...for TB.

These are two happy new friends of ours. Happy cause they know us, but more happy because of that chalupa he is eating.

More friends! Turns out TB is a place where people can really come together and find common ground. That common ground is an insatiable appetite for awesomeness.

Max's super buddy also showed up and had a great time supporting the tastiness. Good moms give their kids bean burritos from TB for all the protein and vitamins.

And we left satisfied that we had done our civic duty, and gotten plump in the process. This is the aftermath of cinnamon twists on Max's face.

We retired at our new apartment to watch the kids go mega nuts on the floor. These guys don't have carpet like we do, so they took advantage in a big way.

Looks like we are going to have a lot of fun here. Thanks for supporting me and my irrational love for the border. 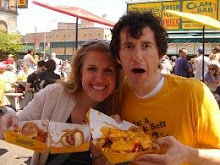